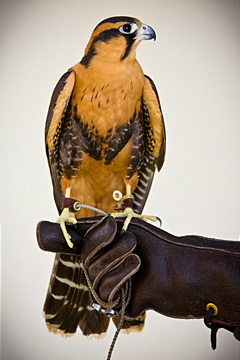 Last year we added a few Aplomado falcons to our bird abatement team. Their effectiveness became so clearly apparent from early on that we are now hoping to add a few more this year. Their willingness to pursue anything that moves is so effective and their potency in a direct pursue is extremely remarkable. Their flying style and ability to tolerate hot weather and chasing nuisance birds in the canopy of an orchard where most damage causing birds find refuge from larger falcons, makes them a very important part of our crop protection. Where large flocks of starlings are best managed with larger peregrine falcons, intimidated individual birds sit within the safety of the trees and wait for the larger falcons to go away, and then they either proceed to cause more damage or they attract other birds nearby by calling them in. the Aplomado falcons weed-out those individual birds by chasing them out of the orchard one at a time. Aplomado falcons are like heat-seeking missiles. Once they pick their prey, they will pursue it for very long distances and often catch them. 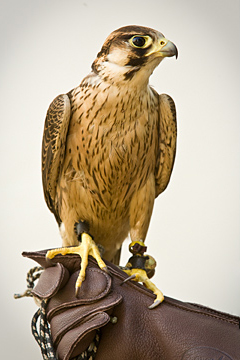 Barbary falcons are a desert sub-species of peregrines and they can tolerate the heat very well. Their natural food source consists of small birds and doves Therefore, their adaptability in bird control situations where they can chase small birds all day is invaluable. Barbary falcons are extremely fast birds, smaller than the other sub-species of peregrines, being native to Northern and Eastern parts of Africa, Middle East, Central and Southern Asia and Mediterranean Europe.

Barbary Falcons can be a little rangy and very often may use thermals to rise to the havens in order to reach cooler air in warmer climates or warmer times of the day. This particular habit that is genetically imbedded in these birds requires a more advanced handler or a tighter window of management to prevent losses or long recovery efforts. 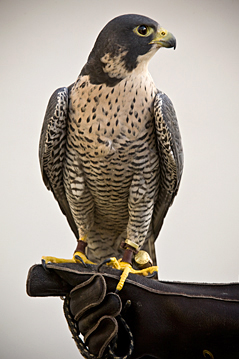 Peregrine falcons are the fastest animals on the face the planet, capable of diving at over 200 MPH (One individual was clocked at 275 MPH) out of great heights in pursue of prey species. Their natural diet consists of primarily birds and varies from shore birds to swallows, pigeons, doves and even waterfowl much larger than themselves. The sheer kinetic energy of the peregrine falcon’s weight traveling at ultra terminal velocity colliding with prey much larger (sometimes 4-8 times larger) than themselves, allows the peregrine to take prey by breaking their neck in-flight. Here at Falcon Force, LLC, we have numerous peregrines used in our bird control program. The males are preferred to females because they are more aerial being smaller than females. Their ability to manage large flocks of starlings and staying airborne for a longer time makes them the ideal pest bird control species used for agricultural bird abatement. 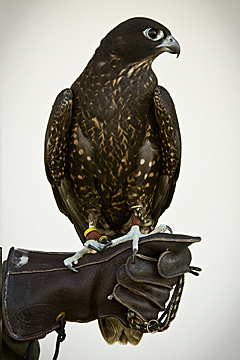 Larger hybrids are normally used in managing larger problem birds, such as sea gulls. Our hybrids are trained to climb to extreme heights and hold their position for very long periods of time. This style of flying is called “waiting on” in falconry terminology. While this style is most often utilized in falconry birds where a falcon waiting on the falconer at over 1000 feet in the air has a very wide killing cone and advantage on the prey down below, it is equally effective in controlling problem birds in an abatement situations. Most birds will simply refuse to fly under a falcon waiting above for an opportunity to dive at an extreme speed to catch its prey in mid-air. 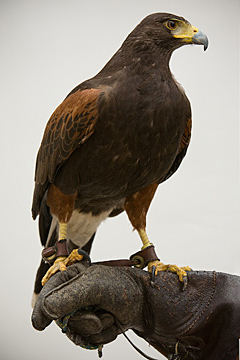 A very easy and sociable species, the Harris Hawk is extremely versatile and capable to adapt to any abatement situation. Its intelligence and desire to work with the falconer is due to the social nature of this species. In the wild these birds hunt in packs. Often multiple Harris hawks can be used together in various bird control situations. Most often these birds are used for controlling pigeons and seagulls. Harris hawks are also used to manage rabbit, goose, and coot populations on golf courses and costal resorts. Landfills infested by sea gulls and crows can also benefit from Harris hawks. 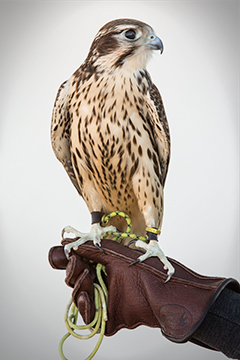 Prairie Falcons are a native species to most of the western states and as their name suggests they occupy the desert prairies and grasslands. Their natural prey consists of birds like quail, dove, larks and some rodents. Prairie Falcons are known to be very aggressive towards their prey and many falconers will attest that they are the hardest hitting falcons used in the sport of falconry. This year for the first time we acquired a male Prairie Falcon to test their capability in our bird abatement program, and the results so far have been very positive. Given they are a desert species, they are more tolerant of the summer heat, and they never fail to chase large flocks of English Starlings out of sight. 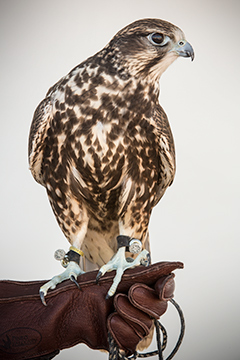 Saker Falcons are a non-indigenous species to the North America. They are native to parts of Africa, Asia and Europe. Saker Falcons are a raptor of open grasslands preferably with some trees or cliffs. They often hunts by horizontal pursuit, rather than stooping like the peregrine’s from a height, and feed mainly on rodents and birds. Saker Falcons have been used in falconry for thousands of years, and is the raptor of choice in the Middle East by Arab falconers. Swift and powerful, the Saker is effective against medium and large game bird species. In our bird abatement program, Sakers are used for abating seagulls and since they are a non-indigenous raptor, they are often used for presentations, movies and educational opportunities.